Why is everyone staring at me? A czar is a pizza….am I the only one that remembers that?

Anthony’s at Adam’s Village makes czars and they do an incredible job at it.

How did I come to this conclusion? Well in terms of pizza around Dot, HiFi basically set the gold standard 35+ years ago. As we all know HiFi no longer exists but Anthony’s scores high marks based on that standard. And, to truly judge a pizza you have to sit down at the establishment….which I did last Saturday. Simply because if you put a pizza into a delivery bag to keep it hot, the steam ruins the crust by sogging in out. This is why you need a chubby dude like me writing reviews….

Now,  there’s tons of pizza shops that order all their ingredients straight from the provisions company pre made….including pizza dough and sauce. I’m sure that can be lucrative but it doesn’t tend to sit will with consumers.

Everything at Anthony’s is made fresh daily which can be labor intensive for a pizza shop to have as it’s mantra but, it does come through in the food. I started with a small tuna sandwich and this may seem trivial but, a simple tuna sandwich serves as a good gauge because most shops you order tuna from don’t put much effort into it. They usually throw some cheap light grade tuna in a plastic bin and drown it with mayo. Anthony’s used a quality tuna and didn’t need to disguise it…..just like they said….it was fresh.  Now on to the pizza!

Their crust game is on point – a little bit of the proofing can be tasted in the crust (yeast)….which is gives it a nice fresh flavor. I have to try one of their multigrain doughs soon.

The sauce is simple – It’s not done my some kitchen magician that thinks his aunt Mary from Dublin’s recipe of ketchup and oregano is going to win awards some day. It tastes Italian, the tomatoes and basil come through and doesn’t take away from the pizza.

And of course the cheese, some folks blend mozzarella and provolone at different ratios to come up with their blend. Some of this is designed to give a bit of saltiness or smoke to the cheese. Anthony’s comes really close to HiFi in this arena!

For you purists they offer all your traditional toppings plus some different looks – I have to try the asparagus, goat cheese, prosciutto and pine nuts.

The only thing missing at Anthony’s is this guy Pasquale, he’s an absolute brilliant addition to any fine pizza establishment. (Hat tip to Mark Doherty)

Go check out their menu HERE 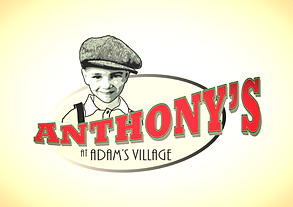