No Sleep till ‘N Sync?

Well…the VMA’s are coming. It’s the only time of the year you get to actually see music performed on MTV.

Everyone is talking about this ‘N Sync reunion like its the second coming of Led Zeppelin or something. Sure…they sold tons of records…but we all really know JT was just throwing his old crew a bone. Think about how things have panned out for Justin post ‘N Sync aside from Brittany Spareribs kicking his balls in.

No seriously…lets run down how Justin decided to give the finger to everyone.

#2 Then he’s like “You know what ? I have seen them a few times….maybe I should share at least one with the world….I’m gonna rip Janet’s cone out at the Superbowl”, Tom Brady gets so pumped he lets out a giant “f*ck yeah” in the locker room and leads the Pats to victory. This was a 50/50 split though because Michael Jackson got scared and cancelled his tour with Justin because he didn’t want JT ripping out his cone during a show.

#3 Then he decides to take up acting after dating Cameron Diaz and takes on Saturday Night Live with a song he wrote …. the song goes into the history books and along with the Lonely Island crew, establishes SNL with a strong streaming video presence on the internet for the first time.

#4 He decides he wants Scarlett Johanson…makes it happen.

#5 After he tells ScoJo to beat it….. he decides to bring sexy back with his second album. The population in China explodes by 2 billion.

#6 After a rough night at the Playboy mansion…JT wakes up with some ripped jeans. He decides to start William Rast.

#7 Decides he’s bored and wants to act again and joins the cast of that Facebook flick. While out at lunch one day where all kinds of rich and good looking people eat organic food he asks his coat holder “Hey, who’s this Biel chick? What a set of cakes on her huh? I need those cakes in my life.” He gets the cakes in his life…. 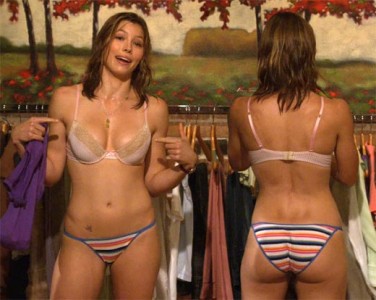 #8 After being named the most stylish and the handsome cat on the planet by all the magazines he decides to test his clout. He claps his hands and tells all his people to let Mila Kunis know that he’s doing a movie with her called Friend with Benefits and she will have to be naked for most of the production. Bam….done! Jessica gets pissed at him and bolts….

#9 JT is like “I really don’t have time for cakes right now. I’m all up in this Kunis business and I need to serve my country…. I’m taking Corporal Kelsey De Santis to the Marine Corps ball.”

#10 After opening a few restaurants, Justin decided he needed cakes back in his life. He rents a mountain or some sh*t in Jackson Wyoming and pops a 5 pound diamond on her. She says “ummm…f*ck yeah!”

#11 JT is so pumped about his upcoming wedding he decides to get back to his musical roots. He calls JayZ and says “HOV! I got 99 problems and cakes aint 1! Call Timbo….we are making some music and going on tour.”

The 20/20 experience is born….cakes agrees to let JT do videos with artsy naked chicks because there’s no way Robin Thicke will ever one up her man.

#12 Buys a huge chunk of MySpace after reminiscing about meeting cakes on the set of the Facebook flick.

#13 After getting married and crushing it at Fenway….part 2 of The 20/20 comes out next month…do you guys see a trend here?

My point is simple….JT was ‘N Sync. And the only reason they are reuniting is because JT decided he was bored. There’s no need for the guys to reunite because you can just go see a JT show. I really can’t see the value they bring to the table.

Think Im being irrational? I want my readers to make lists of all the things the rest of the ‘N Sync crew have been doing since the band split. Combine them, and if the list even comes close to this one….you win a Dot Rat shirt.

If not, you have to walk Dot Ave dressed as this guy without getting sucker punched.

This may sound like some pseudo Tom Brady man crush thing. But I’m just giving credit where it’s due….